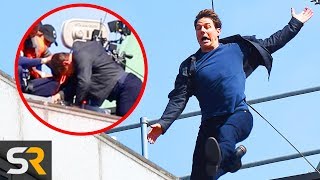 Furious 7 Behind the Scenes Part 5

Tom Cruise is no stranger to doing his own stunt work to our channel Tom Cruises fascination with doing extremely dangerous and crazy stunts is part of what makes the Mission Impossible films so successful. Each entry amps up the intensity and forces the audience to question the stars sanity. Most of these stunts can be done with CGI, but thats the cheap and easy way out according to Tom Cruise, who would rather risk life and limb to get the best stunt for the film. For instance, hes learned some pretty advanced military skills in order to do scenes in the franchise, including being the first actor to do a HALO jump on screen for Mission Impossible Fallout and learning how to deep dive with professional divers for an extended underwater sequence. He opened up Mission Impossible II with a daring cliff climb at Dead Horse Point in Utah, where he scaled the rocks with only a thin safety cord-no nets and no crash mats. He brought it up with Ghost Protocol and scaled the tallest building in the world, the Burj Khalifa. He strapped himself to the side of a plane as it took off, supported only by a harness, battling the speed and the winds. The knife to the eye in MI2 was actually done for real-with a real knife because, why not at this point. Measurements were taken to make sure Cruise didnt lose an eye in the process. Hes driven motorcycles without helmets at breakneck speeds, including in the city streets and on open highways. Most amazingly though, he learned to fly a helicopter for a mountain aerial chase scene in Mission Impossible-Fallout. Featuring Entry 1 THE HALO JUMP Entry 2 CLIFF CLIMBING AT DEAD HORSE POINT Entry 3 HANGING OFF THE SIDE OF A PLANE Entry 4 DEEP BREATH Entry 5 THE KNIFE TO THE EYE Entry 6 MOTORCYCLES Entry 7 THE BURJ KHALIFA CLIMB Entry 8 THE HELICOPTER SCENE Our Social Media ScreenRant Our Website