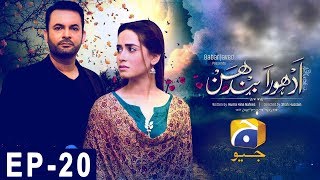 Adhoora Bandhan Episode 20 Har Pal Geo Ifrah, protagonist of the story Atiya has a self- effacing, benevolent and a polite demeanor. At an age of eighteen, when girls fanaticize about their marriage, she worries about her shelter. Daughter rose by a single mother, is being forced to marry her cousin. The girl barely escapes the situation and reaches to the land of stepfamily where she is humiliated, kidnapped, kicked out of the house followed by several troublesome incidences which make her stuck in a vicious cycle. Despite having a mother who leaves Ifrah high and dry due to her own reasons, the protagonist hopes for a figure to play the role of a bulwark and protect her against all odds. Written by Huma Hina Nafees Directed by Shah Hussain Produced by Babar Javed Cast Nouman Masood,Farah Shah,Suhail Sameer,Madhia Rizvi,Erum Akhter,Faria Sheikh,Naeem Tahir,Furqan Qureshi,Rashid Farooqi,Farah Nadeem,Uzair Abbasi,Yasir Ali,Zain Khan,Omer,Ramsha Khan,Sabah,Rashda Tabbasum,Nadeem Tahir,Hafsa Butt. harpalgeo GEO