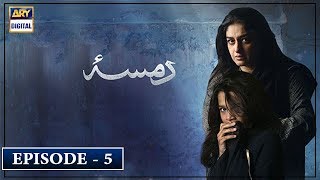 Download ARY Digital App The transportation of a child for the purpose of slavery is a huge crime that is prevalent in our country. The begging mafia has a major role to play in child kidnapping and transportation. Damsa highlights the journey of a mother who goes against all odds to find her daughter who is kidnapped by the heinous mafia. Nadia Jamil as Areeja is a strong-willed woman, and a nurse by profession. She is married to Musa and has two children, Damsa and Rahim. Shahood Alvi as Musa is the husband of Areeja. He works as a manager at a well-reputed restaurant. Emaan Sheikh as Damsa is the teenage daughter of Areeja and Musa. She is adored by both her parents. Falak Naeem as Rahim is the son of Areeja and Musa. He is the youngest of the two children. Areeja and Musa had a love marriage, and are living a happy life together with their two children Gul-e-Rana as Rehana is the mother-in-law of Areeja. She is a woman that has a conservative mindset. She has little love for Damsa as she is a girl. Ayesha Gul as Sofia is the daughter of Rehana and is similar to her in nature. The family is torn apart when Damsa is kidnapped by the mafia. From there starts Areejas struggle to find her daughter in spite of the lack of support from her own family. Ismat Zaidi as Abro is the mother of Areeja. When nobody stands beside Areeja, she is the one who supports her throughout. Talat Hussain as Sohail is the owner of the restaurant Musa works in. Momal Sheikh as Saman is his only daughter whom he loves a lot. Related Damsa is here to talk about something no one ever talks about Saman had an abusive marriage and is trying to recover from it. She befriends Musa who helps her out in her difficult phase. Saleem Mairaj as Rehman is the leader of the mafia and is involved in the kidnapping of Damsa. Khalid Malik as Ahsan is a righteous journalist who helps Areeja in her journey to find Damsa. Directed by Najaf Billgrami Written by Asma Nabeel Cast NadiaJamil ShahoodAlvi Gul-e-Rana Asiya Alam Ayesha Gul Emaan Shaikh Falak Naeem Ismat Zaidi Talat Hussain Momal Sheikh Saleem Mairaj Khalid Malik Bakhtawer Mazher Samina Nazeer Haniya Naqvi Sameed Sarosh Nusrat Jahan Tanveer Abbas Shariq Mehmood Watch Damsa every Monday to Wednesday at 900 PM, only on ARY Digital. What about this drama intrigue you the most Have your say in the comments section below. Official Official Twitter Official Instagram Website Watch ARY DIGITAL LIVE ARY DIGITAL Blogs Dramas Schedule Drama Reviews Drama OSTs Behind The Scenes ARYDigital ARY Digital Official Channel, For more video our channel and for suggestion please use the comment section.