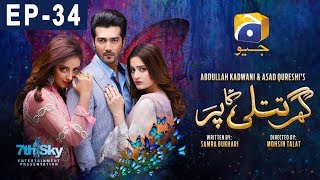 Ghar Titli Ka Par - Episode 34 HAR PAL GEOThis is the story of betrayal disguised in friendship Shafaq and Anji are childhood friends. To Shafaq their friendship means everything to her but to Anji it is an option for her to get hands to better life. Anji understands that Shafaq has a better lifestyle and she can have access to all these things if she remains in Shafaqs life. Shafaqs sister in- law will soon sense Anjis intentions and she will try to protect her meanwhile Anji will marry a guy from well- to- do family and they will shift to Lahore. While Shafaq is upset about Anjis leaving the city and trying to move on in her life, Anjis life in Lahore turns into a disaster as she doesnt know how to keep up with household chores and life.After sometime Shafaq will be married to Azar who is from Lahore and right after their wedding she will shift to her home in Lahore. Two friends will reconnect as they are in the same city however when they meet Anji is jealous of Shafaqs new life so much so that she will try to end Shafaqs marriage.Written by Samra BukhariDirected by Mohsin TalatProduced by Abdullah Kadwani amp Asad QureshiProduction House 7th Sky EntertainmentCast with respective character namesAiman Khan as Shafaq, Sanam Chaudhry as Anjum Parveen Anji,Shahzad Sheikh as Azar, Ali Abbas as Kamran,Yashma Gill as Erum Shafaqs bhabhi,Ali Ansari as Aftab Anjis husband,Humera Bano as Razia Anjis mother,Mariyam Mirza as Naheed Shafaqs mother,Shajeer Uddin as Atta Shafaqs father,Barjees Farooqui as Simi Shafaq ki khala,Mabsira Khan as Shahida Erums mother,Mizna Waqas as Fakhira elder sister of Anji,Ramsha Akmal as Lubnah younger sister