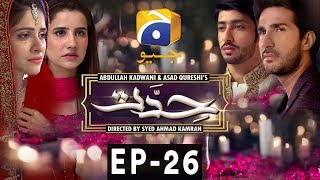 Hiddat - Episode 26 Har Pal Geo Hiddat The story revolves around the central character Nimra Arij Fatima, who belongs to well established, noble and traditional family. She is kind of romantic and fun loving girl but her fiancé Adnan Adeel Chaudhry to whom she is engaged since her childhood is having dry personality. Nimra never appreciates his rude and introvert behavior towards her. One day Nimra meets with the cousin of her friend, Farhad Farhan Mali. He is jolly, ebullient and full of life type guy. He catches Nirmas attention in early meetings and she starts adoring him. Her misery starts when she commits adventurous step of leaving home and start living with Farhad in his student sharing room. Nimras family reputation gets damaged with this act and her brother Saad Taifoor Khan wants to kill her. Adnan ties the knot with Nimras younger sister Aqsa Saniya Shamshad to take revenge from ex-fiancé. Farhads mother also denied accepting Nimra as his life partner and Nimra has to move some of her relatives house. She undergoes in a situation to marry with widower man. Written by Samra Bukhari Directed by Ahmed Kamran Produced by Abdullah Kadwani amp Asad Qureshi Production House 7th Sky Entertainment Cast with respective character names Arij Fatyma as Nimra, Adeel Chaudhry as Adnan, Saniya Shamshad as Aqsa, Farhan Mali as, Farhad, Anum Tanveer as Aqeela, Seemi Pasha as Azra, Faryal Mehmood as Seema, Rashid Farooqui as Shabbir, Saleem Mairaj as Qurban, Humaira Zaheer as Kulsoom, Taifoor as Saad, Maria Khan as Asma, Barjees Farooqui as Amma. Watch More Videos harpalgeo