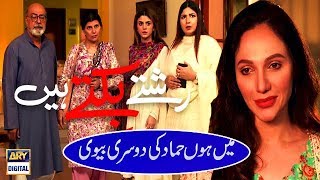 Download ARY Digital App In todays world, the social evil dowry is still prevalent in our society. Rishtay Biktay Hain depicts how parents of girls are forced to go beyond their means to give huge dowries to their daughters in-laws to ensure her happiness. Related Bewafa A tale of love, getaway, and betrayal Zubab Rana as Zeba is the only daughter of Khalda and Sharafat. She is a simple girl who likes her cousin Affan and wants to marry him. Rubina Ashraf as Khalda is the mother of Zeba. She has a kind heart and supported her sister, Farhat and her three sons after her husband died. Shagufta Ejaz as Farhat is the sister of Khalda. Unlike her sister, she is a greedy woman who likes to take advantage of people. Ali Abbas as Affan is the eldest son of Farhat. His aim in life is to have more money and provide a better lifestyle to his family. Asad Siddiqui as Hammad the second son of Farhat. Unlike his responsible elder brother, he is careless and does not like to work. Arsalan Faisal as Babar is the youngest son of Farhat. He is the brightest amongst all the brothers and studies in university. Affan and Zeba are both in love with each other and get engaged. Javed Sheikh as Shehryar is an honest man who is strictly opposed to the concept of dowry. He meets Affan due to some work. Saima Saeed as Seema is his wife. Saniya Shamshad as Hania is the only daughter of Shehryar. She is loved and spoiled by her father. Shehryar is impressed with Affan because he is a self-made man. He wants his daughter Hania to marry Affan. Due to Farhat and Affans greedy nature, they choose Hania over Zeba. Zeba is forced to marry Hammad. Ammara Chaudhry as Rida is Babars university friend. She is a simple looking girl who Babar befriends for his own reasons. Srha Asghar as Natalia is the love interest of Babar and belongs to a rich family. Directed By Syed Atif Hussain Shah Late Written By Asma Sayani Cast ZubabRana as Zeba AliAbbas as Affan JavedSheikh as Shehryar Rubina Ashraf as Khalda Muhammad Ahmed Shagufta Ejaz as Farhat Asad Siddiqui as Hammad Arsalan Faisal Saniya Shamshad Ammara Chaudhry Sameena Nazir Srha Asghar Zarmeena Ikram Saima Saeed RishtayBiktayHain Official Official Twitter Official Instagram Website Watch ARY DIGITAL LIVE ARY DIGITAL Blogs Dramas Schedule Drama Reviews Drama OSTs Behind The Scenes ARY Digital Official Channel, For more video our channel and for suggestion please use the comment section.