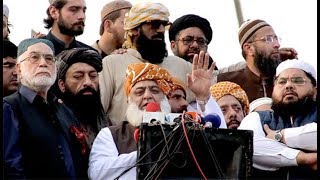 Azadi March Plan B Fazl announces end to Islamabad sit-in, expand protests ISLAMABAD Jamiat Ulema-e-Islam Fazl JUI-F has decided to swing into action with its Plan B, as the party is ending its dharna sit-in in the federal capital and spreading the protest across Pakistan. JUI-F Chief Fazl made the announcement to protesters in Islamabad on Wednesday. We will be leaving here tonight and will stand beside you protesters, so the Azadi March proceeds successfully. Your presence here has pulled out the roots and the next step will be to root out the stem. Give one more push to the already falling walls, he said to the crowd. He appealed to the people who could not join the march to now come out when the protests spread across Pakistan. The JUI-F held a consultation meeting under supremo Maulana Fazl-ur-Rehman today, where it devised its future strategy. According to the Plan B, the JUI-F will end the Islamabad sit-in and block highways across Pakistan. Following the development, Azadi March participants started to dismantle their tents and started gathering their belongings to leave the H-9 venue in Islamabad. JUI-F announces plan to block main roads from tomorrow Addressing participants of the Azadi March, Atta ur Rehman said that implementation on Plan B has already begun. According to our Plan B, we have staged a dharna protest on the Quetta-Chaman highway, said Rehman. We will also block Chakdara Chowk in Lower Dir and Indus Highway according to our plan. He said that Shahrah-e-Resham was blocked as well by the Azadi Marchers. We will close Indus Highway at the Link Road, he said. In Punjab, we have blocked G.T. Road at Buzdar. He said that workers of the JUI-F will start implementation on Plan B from Thursday at 200 PM. JUI-F leader Rashid Soomro also spoke to the Azadi March protesters and urged them to gather at Hub River Road on Thursday at 200 pm. Workers should not carry sticks to the sit-in protests, he said. Ambulances must be allowed to pass through. Soomro said that one should not think that the Azadi March was nearing its end. He said that the protest was inching towards success with each step. From 200 pm tomorrow, the motorway in Sukkur will be blocked, he said. At the same time, the road linking Ghotki to Punjab will also be closed. Soomro said that Hub River Road will also be closed on Thursday from 200 pm and the same will be done to the road that links Kandhkot to Punjab. Under Plan B, protests in Balochistan Earlier, the protesters were blocking the Quetta-Chaman Highway for traffic. JUI-F activists along with Pashtunkhwa Milli Awami Party have blocked the Quetta-Chaman highway while pursuing the Plan B of the Azadi March. Workers from both parties have blocked the Syed Hameed Cross for traffic, causing problems for the passengers. Provincial JUI-F leader Maulana Abdul Wasay said Plan B was underway in Balochistan with the highway being closed for traffic. On the other hand, a large contingent of levies forces have reached the spot and are negotiating with the protesters to open the highway. Fazl lays out details of Plan B On Tuesday, while addressing the participants of Azadi March, JUI-F Chief Maulana Fazlur Rehman had urged his party workers to come out from their homes to execute the Plan B which involved blocking major highways and trade links across the country. The JUI-F plans on blocking all main roads throughout Sindh, Punjab, Balochistan, and Khyber Pakhtunkhwa KP. All the thoroughfares of Islamabad and Rawalpindi will be closed as well by the Azadi March supporters. In the meeting, the JUI-F chief was briefed about the plan by all four provincial chiefs of the party. Fazl expressed his satisfaction over the arrangements in place for the plan. The Azadi March Thousands of protesters have converged on the federal capital under the banner of the Azadi March, seeking to send packing Prime Minister Imran Khan packing. The Azadi March caravan, which set off from Sindh, left Punjabs city Lahore on Wednesday and culminated its journey Thursday night in Islamabad. Opposition leaders delivered fiery speeches against the PTI government on Friday, giving the prime minister a 48-hour ultimatum to resign. JUI-F chief Maulana Fazlur Rehman gave the premier two days to step down, failing which the protesters may march on to the PM House, force the prime minister to step down, and arrest him. The government announced on Saturday that they would approach the courts over Fazlur Rehmans statements, accusing him of instigating people and rallying them for mutiny.