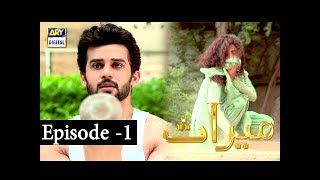 Meraas Episode 01 - 7th December 2017 only on ARY Digital Official Channel. Money cannot buy happiness, Meraas is ARY digitals exclusive drama serial based upon one of the biggest problems of society, patrimony and its effects. Sawera Nadeem plays the character of Jahan Aara, is a single woman, who has a dominant personality and rules over her family because she owns all the property. Her father does not let her get married so that the heritage remains in the family. Where Mohsin Abbas, plays the character of Haris, who is a poor man and wants to get settled in abroad. He wants to be rich, for that he can go to any extent. His mother wants him to get married so that he has a reason to come back. Saboor Ali plays a role of a poor girl as Jiya, who is living with her uncle and waiting for a miracle which will change her life. On demand of his mother, without being happy, Haris marries Jiya, which becomes another sorrow for her. Whereas, Jahan Aara, is finding an opportunity to marry somebody and co-incidentally meet Haris. She sets a deal of getting married, on the terms that she will give him a huge amount of money and can fulfill her wish of living in abroad, but in return, he has to be her life partner. To break Haris marriage, Jahan Aaras stepbrother Ali, plays by Fahad Shaikh, creates a mess in Jiyas life on his sisters wish. What will happen in Jiyas life Will love win or money Writer Hina Aman Director Ali Hassan Cast Sawera Nadeem, as Jahan Aara Mohsin Abbas, as Haris Saboor Ali ,as Jiya Fahad Shaikh, as Ali Qavi Khan, Shaheen Khan, Noor-ul-Hasan, Asma Abbas, Adnan Gabol, Amir Qureshi and Others. Watch MERAAS Every Thursday at 9 00 pm only on ARY Digital. Andriod App IOS App