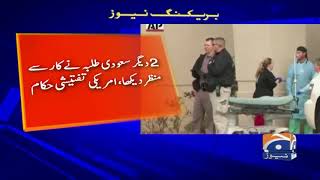 Military student US Navy base

How do the poor see life Uneducated, not stupid Rajen Makhijani TEDxNTU

See What Happens When A Plane Violates Presidential Airspace TODAY

How a Single Swedish Submarine Defeated the US Navy

US Navy confirms UFO videos are the real deal

US bombs pro-Iran militant group in Iraq, Syria in retaliation for rocket attack

MIAMI An air force trainee opened fire on Friday at a US naval base, killing three people before being shot dead by police, officials said. The shooting, which took place at Naval Air Station Pensacola in Florida, left eight people injured including two sheriffs deputies who responded to the attack. Florida Governor Ron DeSantis said the shooter was from Saudi Arabia, attending the flight school in Florida. Theres obviously going to be a lot of questions about this individual being a foreign national, being a part of the Saudi air force and then to be here training on our soil, DeSantis told a press conference. Obviously the government of Saudi Arabia needs to make things better for these victims. And I think they are going to owe a debt here given that this is one of their individuals. Commanding officer Timothy Kinsella said the shooter whose name authorities declined to release was an aviation trainee, one of a couple hundred foreign students present at the base. Read also Saudi King Salman Bin Abdul Aziz denounces US naval base shooting My thoughts and prayers are with the victims and their families during this difficult time, President Donald Trump tweeted. We are continuing to monitor the situation as the investigation is ongoing. For More Videos - Visit our Website for More Latest Update - GEONEWS BreakingNews