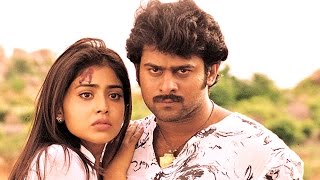 Watch this Bollywood Hindi Action Movie Rebel Man On Alert dubbed from Super-hit South film Starring - Prabhas, Raju Uppalapati ,Shriya Saran, Bhanupriya, Pradeep Rawat Synopsis - Shivaji Prabhas and Ashok Shafi are the sons of Parvati Bhanupriya. Shivaji is her stepson, but Parvati showers equal affection on both of them and this is not liked by Ashok, who is her real son. They are one of the families living on the coastals of Srilanka. One day, this village is forced to evacuate and Shivaji is separated from the family. He ends up in a different boat and lands in Vizag port. He is brought up in the port itself. But his search for his mother never ceases. In that process he comes across Neelu Shriya. Here, the port is dominated by Baji Rao Narendra Jha and some goons using refugee labor for their own gain. Shivaji is an aggressive guy, but is controlled by his well wishers. One day, he reacts aggressively in defence of himself and the other refugees. People start calling him Chhatrapati. Ras Bihari Pradeep Rawat comes down to Vizag in the hunt for Shivaji since he killed his brother Baji Rao. Ashok, too, lands in the same place. Realizing that Shivaji is his brother, he joins hands with the bad guys. The story is then of Chatrapati who is searching for his mother and has a bunch of bad guys including his brother on his back while the entire port looks up to him. Us