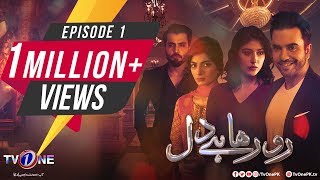 Ro Raha Hai Dil Episode TV One Drama 27 August 2018 RoRahaHaiDil JunaidKhan TVOneDrama Starring Junaid Khan, Sonia Mishal, Asad Siddiqi, Mariam Ansari, Atiqa Odho, Usman Peerzada Laila Wasti, Director BQ Writer Sameena Nazeer Producers Erum Bint e Shahid Zeeshan M Khan Exec Producers Seema Taher Khan to stay updated with new uploads. Episode Review Sometimes humans lose mistakes in the worlds colours and then make mistakes that the whole age does not seem to be solved except for the many mistakes that they have done. And most of the people do serious mistakes in their past that they become aware of it till the last breath. The first episode of the drama serial Ro Raha Hai Dil, went on air last night and received a lot of appreciation from the audience. In the first episode of the TV series new upcoming serial, Ro Raha Hai Dil, Daud Sahib has made mistakes in the past that there is a lot of mistakes that he has not yet seen for years. And his wife lost her life due to his negligence, but he wasnt aware of the hatred knitting in his daughters heart. Sana, Dauds wife was suffering from chronic illness and she left when her daughter wanted her the most. However, time flew and Zoya is an adult now, also her phuphus son is still mad for her. Ahad, a handsome looking guy who wants to get married to her, on the other hand, she didnt bother to meet her phuphu nicely as she knew her aunty provoked her dad, and she committed suicide. Zoya is one of the worst daughters of Daud Sahab, and Zoya calls them her mothers murderer. Zoya is a Broad-Minded Girl and Daud does not take such an eye. Daud asks Zoya when his punishment will end So, Maria says plainly that this punishment will only be erased after the death of one of us, then whether you die or not. Will Daud be able to understand Zoya Will Zoya be able to recognize Ahads love Drama Synopsis Zoya is an angry young woman who hates her father Dawood Shah because she blames him for her mothers death. Her anger even makes her reject her loving fiancee ahads efforts to make her Happy when the handsome and suave Humayun enters her life, Zoya falls in love with him. but Ahad feels that Humayun is a Selfish, Ruthless Man who will Harm Zoya. Is Ahad right about Humayun Will he be able to save Zoya RoRahaHaiDil TVOneDrama, TvOnePk JunaidKhan SoniaMishal AsadSiddiqi MariamAnsari TVOneOST Watch Complete Episodes of TVOne All Dramas and Serials TvOnePK to TV One Global for unlimited entertainment Like us on Follow us on