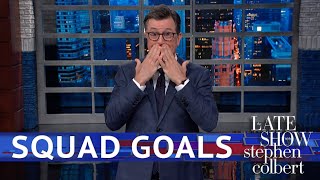 By Attacking Democrats, Trump Unites Them

When Trump Doesnt Like The News, He Interrupts It

Jon Stewart Climbs Out From Under Colberts Desk To Debut Irresistible Movie Trai...

Why Presidential Candidates Are Staying Off FaceApp

Chris Cuomo Thinks Bolton, Mulaney Would Tell The Truth If They Testify

Meanwhile... How NOT To Dry Your Nether Regions

This Monologue Goes Out To You, Mr. President