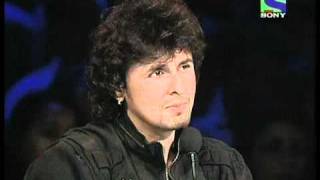 In a message, Sonu Nigams father, Agam Kumar Nigam, thanks Sonu for carrying forward his unfinished dream of becoming a playback singer and fulfilling it. Sonu Nigams cute little son Nevaan sings his fathers Kal Ho Na Ho and gives a surprise visit to his daddy on the show.X FACTOR INDIA -- is the big daddy of all music shows in scale and size. With versions in 24 countries and a unique format that gives contestants the chance to showcase their talent regardless of the age.A singing show with a unique format that gives everyone a chance to showcase their talent. Open to all citizens of India over the age of 16, the auditions will be divided into 3 categories, viz. 16-25 years, 25 above and individual groups. Participants that make through the final selection will then be divided into three groups with each group headed by a mentor. Of this lot, the top 12 will be selected to participate in the Galas and prove their mettle to the entire nationHosted by the multi-talented Aditya Narayan judged by the stalwarts of the Indian Film Industry Sonu Nigam, Shreya Ghoshal Sanjay Leela Bhansali, the show premiered on 29th May 2011 on Sony Entertainment Television.Sonu Nigam He is a highly successful actor, singer and anchor. Having spun numbers like Mera Rang De Basanti Chola, Dil Dooba and Kal Ho Na Ho among numerous others, this versatile performer has won many accolades and is now all set to mesmerize the nation with his role as a judge in X FACTOR INDIA .Sanjay Leela Bhansali Needless to say, one of Indias greatest film makers having moved hearts right from his first film, Khamoshi -- The Musical to Hum Dil Chuke Sanam to Guzaarish, this producer, writer, director and recently turned musician has received several accolades for his creativity abilities. As one of the judges for X FACTOR INDIA Sanjay has vowed to pick only the best.Shreya Ghoshal For Shreya life has come full circle, from a being a contestant on a reality show to being the judge on the biggest music reality show on Indian television. This gifted singers first film Devdas not only saw her getting a Filmfare RD. Burman Award for New Music Talent but also the best female playback singer award. After lending her voice in more than 180 films and receiving four National Film Awards, she is all set to win hearts in her new avatar as a judge in X FACTOR INDIA.