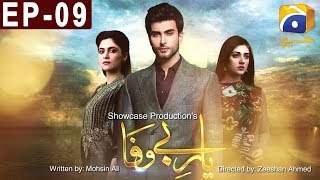 Yaar e Bewafa - Episode 9 HAR PAL GEODesires Every human heart is running behind to catch its wishes and achieve betterment in life. Drama serial Yaar-e-Bewafa is also focusing on the issue that how selfish a person can behave, when they get a little hope for the better future, even they forget their present belongings and relationships. This play revolves around two different families which will connect each other with the progression of events. Hamza is living with his mother, wife and a son. His mother raises him with lots of sufferings and difficulties after the death of his father. She made sure about his quality studies despite their financial problems. Hamza met his wife Nimra in university and they fall in love with each other. Nimra belongs to a rich family while Hamza is just a white collar guy. Nimras parent opposes her below standard choice and discontinues their connection with her after wedding.Another dimension of the play is Saleems family, who live with his wife Amna and a son. He is kind of short-tempered, truculent and works in a chemical factory. Once he gets ill and after a complete diagnosis, shocking news reveals that he is suffering from lungs cancer. Now Amna faces financial crises due to Saleems illness. The fate brings another woman in Hamzas life after the departure of Nimra. They both develop strong bonding, affection and soft corner for each other. Nimra who is busy in collecting materialistic happiness for her close ones, seems like she is losing them forever.Written by Mohsin AliDirected by Zeeshan AhmedProduction House Showcase ProductionsCast Imran Abbas Saleem Mairaj, Saad Fareedi, Mehboob Sultan, Farah Zeba, Faisal Bali, Ikhyar Khan, Areej Fatima, Samina Ahmed, Tahir Jatao, Haneef Bachan, Surooj Afaq, Sharjeel Khan, Fida Daar, Sarah Khan, Ray Khan, Birjess Farooqui, Munnazah Motiwala, Syed Sajid, Dr. Kashif Malik, Bawa Jee, Falak Shahzad, Aaliyan Wasiq.HARPALGEOGEOYAAREBEWAFA