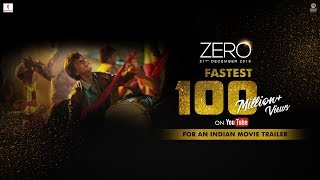 Heres presenting the official trailer of Zero starring Shah Rukh Khan, Anushka Sharma and Katrina Kaif and directed by Aanand L Rai. The film releases in cinemas on 21st December, 2018. ZeroTrailer ShahRukhKhan Zero21December Red Chillies Entertainment and Colour Yellow Production come together to bring the film, produced by Gauri Khan, ZERO is all set to release worldwide. Actors Anushka Sharma, Katrina Kaif, Shah Rukh Khan, Producer Gauri Khan Director Aanand L Rai Writer Himanshu Sharma Co-producer Karuna Badwal Music Ajay-Atul DOP Manu Anand VFX Supervisor Harry Hingorani Production Designer Wasiq Khan Editor Hemal Kothari Born to a wealthy family and raised in an environment of affluence and indulgence, Bauua was never failed by Meerut or its people. But when he meets two women Katrina Kaif, Anushka Sharma, his experiences with these women take him on a journey to complete his incompleteness and broaden his horizons to find a purpose he never knew he had. For more updates on Zero, click on the links below